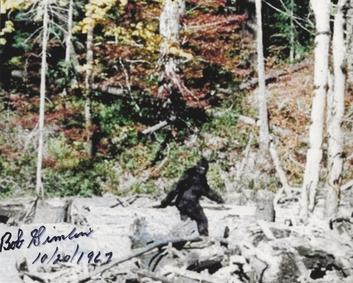 “First the Ukrainians tried to shell their own nursery and sabotage their own chlorine plant just to make us look bad - and now they’re sending Bigfoot after us!” said the Kremlin’s minister of Propaganda Boris Bolloksnikov.

The sasquatch footage is the latest shaky-camera release from the Kremlin that purportedly shows Ukrainian aggression towards Russia, their vastly more powerful neighbour who has previously annexed large parts of their country and has spent the past year amassing troops at its borders for entirely unrelated reasons.

Mr Bolloksnikov continued: “And yes I’m 100% sure that this is genuine. It was shot just yesterday in the Luhansk region of Ukraine, and now we have no choice but to invade to protect ourselves.”

It was pointed out to Mr Bolloksnikov that the claimed ‘footage’ was actually quite an old American film that long predated Putin’s reign, and was even timestamped as having been shot in the 1960s, but the Kremlin remained insistent that its only course of action was to push ahead with yet another invasion of its neighbour.

“Today they send giant gorilla men, tomorrow they might send tigers with laser beams attached to their heads!” he added.

"War. What is it good for?" sings Boris secretly ecstatic by the distraction

Sanctions on Russia to include no Horlicks before bedtime, a shirtless Boris Johnson on horseback, and the air-dropping of Dido Harding into Russian territory