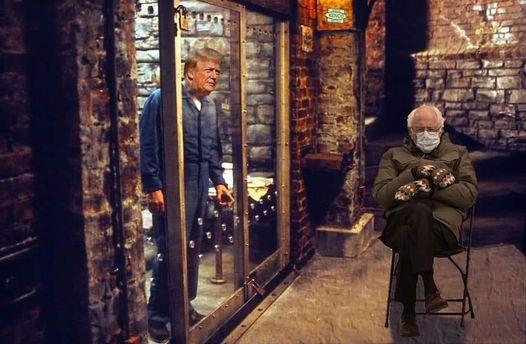 Exhausted rescue workers were last night still trying to find the internet after it became buried under an avalanche of Bernie Sanders memes.

The rescue effort came after photoshopped pictures started appearing everywhere following US President Joe Biden’s inauguration where a picture was taken of a masked Bernie Sanders wearing mittens. Over the next few days a steady flurry of Bernie Sanders memes were created until last night the entire internet was buried in an avalanche of the memes.

Rick Dash, heading up the rescue efforts, said: “It’s slow pain-staking work. Earlier we thought we had found Facebook buried under a meme of Bernie Sanders in The Shining but it turned out to be Friends Reunited. I mean, who even remembers Friends Reunited? So we left it buried.

“One of the rescue workers thought they heard Google screaming earlier and we’re desperately digging through a load of Bernie photoshopped into Marvel movies memes to try and get to the search engine and we’re hoping it won’t turn out to be Bing or even worse Ask Jeeves.

“So far we’ve managed to rescue Twitter, Instagram and the Natwest banking app but our workers are beginning to get tired and we don’t think we’ll be able to carry on much more than another 24 hours.

“At that point my rescue staff have asked for a quick 15 minute break where they say they all desperately need to go the bathroom carrying wipes and vaseline.

“The search is due to continue throughout the night but we are worried that some of the sites like Mail Online might run out of oxygen before we get to them which is a shame as we really wanted to see Beyonce’s latest holiday pap snaps.”

Scotland shouldn't get independence referendum, says former Prime Minister who was never elected to that office