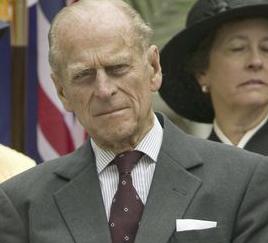 The Late Prince Philip, Duke of Edinburgh, who sadly passed away today, at the age of 99 ¾, has already been making headlines in the afterlife, the News Elephant can exclusively reveal.

At around lunchtime on Friday 9th April 2021, a large ‘BANG’ was heard outside the famous pearly gates making several nearby angels drop their bowls of ambrosia (the heavenly kind, not the tinned rice pudding sort). Upon further investigation, it was clear that the gates had been rammed by what appeared to be a Land Rover from the Earthly plane, but whoever had driven it into the gates had seemingly scarpered because the drivers’ seat was empty.

As they were taking down the license plates, investigating officers were suddenly tapped on the shoulder from behind by a tall, regal looking man in military uniform.

The man, who was grinning ear-to-ear in the way someone does when they’re about to say something that only they find hilarious, said: “Hmmm, heaven is it? Right. Are you lot still throwing harps at each other and floating about on BLOODY clouds? Don’t you do anything else?”

Immediately officers moved to accuse the man of being the driver of the crashed Land Rover, but the man by this point was already rummaging through the heavenly pantry, tossing bottles and packets aside and making a right Royal mess.

At which point the heavenly dignitaries murmured some platitudes and decided they’d best make way for the man, because whoever the hell he was, he seemed important. Luckily, the man then seemed to spot someone who he recognised, and said: “Ah, Margaret! If there’s anyone who’ll know where the good booze is stashed in this place….You’ll never GUESS what Andrew’s been up to…”