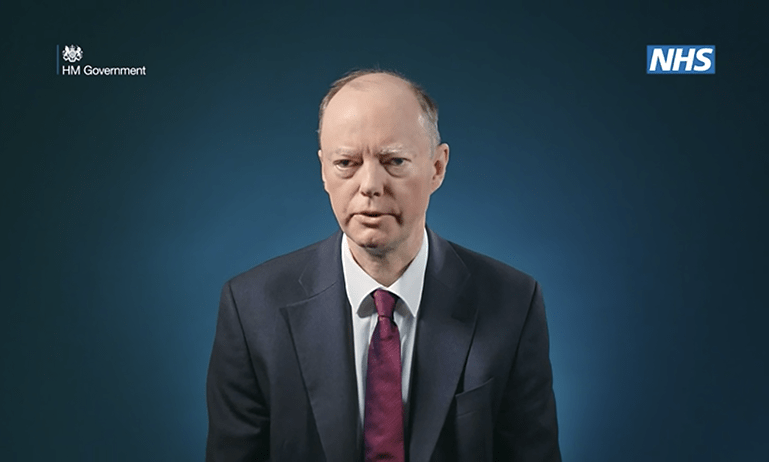 “Oh, that smarts!” says Chief Medical Officer for England Chris Whitty having dunked his bleeding fist into a bucket of ice after his 30th thrashing of the day.

The physician, best known for giving sensible health advice during Government briefings, had just spent the day going around people’s houses in Barnstaple, North Devon, punching morons in the face.

Each time he punches someone, the mask-wearing medic’s fist has to be disinfected to ensure that he is not adding to the spread of the disease and the strain is beginning to show on his face.

“It’s worth it though,” he said. “Today, I managed to punch 17 anti-vaxxers, 11 anti-maskers and two covid hoaxers right in their comptemptuous faces.

“One lady, an anti-vaxxer I think, changed her mind on the spot having been faced with my fist. I still punched her though as she had been shit-talking the vaccine for months. But, seeing her change her mind in real time makes this exercise completely worth it.”

The campaign, which is essentially a live feed of the academic going around people’s houses punching them in the face, will see Professor Whitty travelling to every hamlet, village, town and city in the country on a punching tour which is expected to last the rest of the year.

He does his duty accompanied by a small army of out of work night club bouncers in case any of the morons try to punch him back.

Professor Whitty added: “These people are the reason that we are in lockdown and are expected to be for months as not only do they continually flout the social distancing measures but they are actively trying to encourage others to do so by continually undermining the seriousness of the situation, telling people not to get the vaccine, and generally acting like complete and utter morons.

“All of them think, for some reason, that they are medical experts, more than the actual experts who have made it their life’s work, and are having tantrums about wearing a fucking mask like the babies that they are.

“That is why I find it so satisfying hearing their noses crunch under my fist every time I punch one of them. I’m doing good work here.”

The tour is expected to stop at Woollacombe and Croyde this morning before moving on to Cornwall.