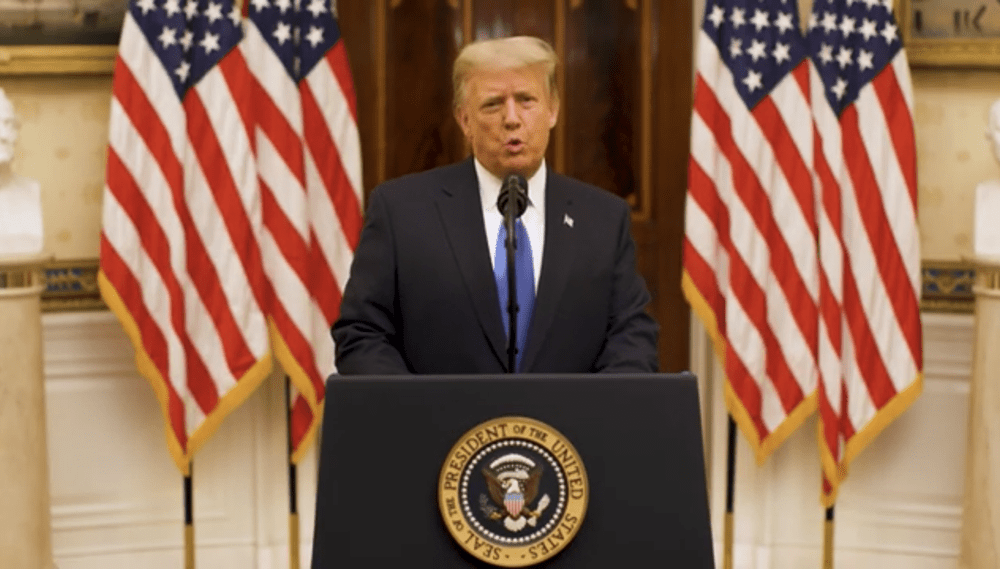 In a videoed speech on the eve of the inauguration President Donald Trump addressed the nation to claim that his insurrection on 6 January had been successful and any reports to the contrary were ‘FAKE NEWS’.

The President, who it is widely reported will be spending his last day in office today trying to get a baked bean stain out of the Oval Office’s carpet, claims that not only was the insurrection, which saw his supporters storm the Capitol, a success but that he has now installed himself as Emperor/warlord and America is to be renamed Trumpland.

He said: “I demand a recount of the insurrection. It was the most bigly successful insurrection ever. No other sitting president has ever incited such a great insurrection.

“Although no-one else can see it, as their eyesight is not as good as mine as I have the best eyesight in the universe, I have surrounded the White House with the heads of my enemies on pikes. Look there’s Sleepy Joe over there next to Nauseous Nancy who is just across from the traiter Mike Pence. For the last two weeks I have been bathing nightly in the blood of Democrats and it is not just me getting into a bath of baked beans left over from a Children in Need fundraiser held in the Autumn.

“As my coup was so successful I am now to be addressed as ‘Your wonderful all powerful leader his Trumpiness’ and I am now Warlord/Emperor of the United States of Trumpland.

“My wife Ivanka, sorry I mean Melania, will henceforth be known as the Mother of Dragons and she will be battling the forces beyond the wall against the wildling Mexicans and the Canadian White Walkers in the north.

“One of my first acts as Emperor/Warlord is to relocate the White House to the 19th hole at my Mar E Lago Golf Resort and I will be holding talks with coronavirus to ensure that it finally leaves our shores.

“Anything else you see on the news in the next few days like Joe Biden getting inaugurated and rolling back some of my more disastrous decisions is completely FAKE NEWS brought to you by a corrupt media as I really will be in charge although it might look to some like I am licking my wounds in Florida. That’s not the case as everything you see from now on is a lie.