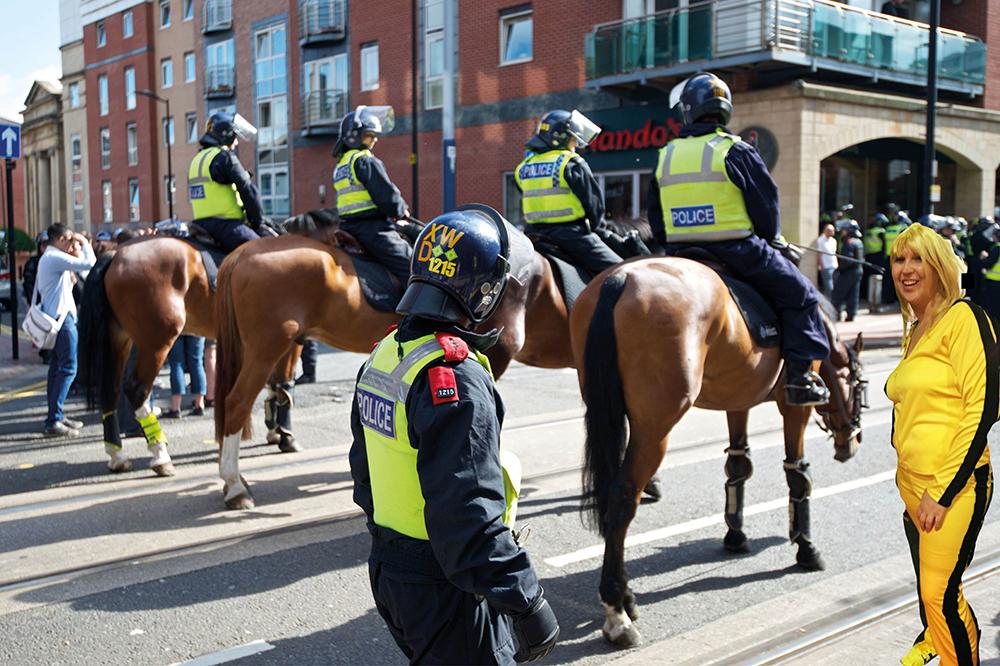 “At first, I thought it was one of those interactive cinema experiences with actors dressed up, to give you the best cinematic immersion ever, but then I got hit with a police baton,” said confused Tarantino fan Elle Driver today.

“I had seen the posters everywhere for a big Kill Bill event, so I dug out my Bride costume, and headed along.”

One of the first indications that there might be something off about the Tarantino fan event was the fact no-one else was in costume.

Elle continued: “I got there, and no-one else was dressed up. There wasn’t even a Reservoir Dog in sight, although there did seem to be a few people dressed as Floyd or Drexl from True Romance but even then they hadn’t completely matched the cosplay.

“They were all holding placards too, which isn’t something I’ve seen in a Tarantino movie, which I thought was weird. But then they started chanting ‘Kill The Bill’ so I knew I was in the right place, except I was a bit confused by the middle ‘The’ in the chant, but I thought it must be some ultra geeky homage to Quentin himself or something. So I went along with it.

“And then along came the police in riot gear but they weren’t acting like normal police as they seemed to be ultra aggressive, but then it hit me that they were emulating the Nazi stormtroopers from Inglourious Basterds so I shrugged and carried on going with the crowd despite it being completely surrounded by police.

“Suddenly there were screams and people were being hit viciously with batons. At this point I thought things might be going a bit too far, but looking at the blood I realised it can’t be real as the crowd hadn’t actually done anything to deserve such a violent reaction from the police officers, so all those that were injured must have been part of the show and were wearing blood packs or something to make it look a bit more realistic.

“I smiled to myself at the thought that they were all actors so thought I would join in and when the baton came towards me at full speed held aloft by a grinning Met officer, I prepared myself to pretend to be hurt.

“I woke up five hours later in what seemed to be a Shawshank Redemption fan event as I was behind bars, which is where I am right now.

“I’ve got to put it to the organisers, they definitely put on one hell of a show and I’ll definitely give them a good write-up on my fan blog even if some parts of the event were a bit iffy.

“Apparently there are more events planned but next time I might go as Hans Landa so I could be on the right side of the event and be able to fit in with the police. I’d be less likely to get injured that way especially if I’m the one holding the baton. Such fun.”